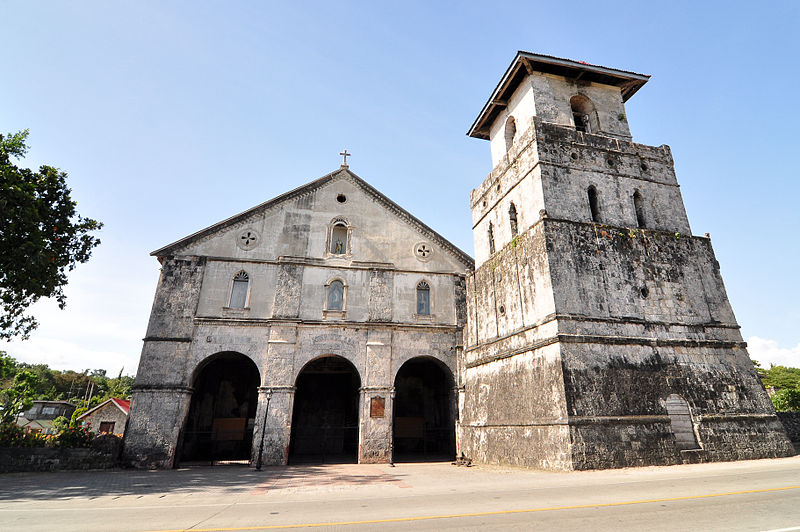 The Church of Immaculada Concepcion in Baclayon is considered to be one of the oldest in the Philippines. Construction began in 1717 where some 200 native forced laborers (obras pias) cut and dragged coral blocks from the sea, using only bamboos in moving and lifting the stones in position. Millions of white eggs were said to have been used as cement. The current building was completed in 1727.

In the 19th century, the Augustinian Recollects added a new facade- pictured here- and a number of stone buildings that now surround the church.

Old broken glasses no longer can be replaced. The colored panes locally available now are different- pattern is limited only to the basic quatrefoil “florentine” patterns and color choices are only 3: amber, green and blue.

The original ones which date back to 16th century are thicker and deeper in color.

The Church of Our Lady of the Immaculate Conception in Baclayon is one of the oldest stone churches in the Philippines and is located in Bohol, in the Visayas region.

The construction was started by the Jesuits in 1596. As is happening in most grand historical structures in the country, the church is in partial disrepair.

The first Spanish missionaries or doctrineros in the region, Fr. Juan de Torres and Fr. Gabriel Sanchez, first settled in Baclayon in 1595. Shortly after their arrival, a visita was erected on the spot. Although Baclayon was the first seat of the Spanish Jesuit missionaries, fear of Moro mauraders soon forced them to move their headquarters more inland, to Loboc. Only in 1717, Baclayon became a parish, and construction of a new church commenced. Some 200 native forced laborers constructed the church from coral stones, which they took from the sea, cut into square blocks, and piled on to each other. They used bamboo to move and lift the stones in position, and used the white of a million eggs as to cement them together. The current building was completed in 1727. The church obtained a large bell in 1835. In the Baclayon church is a dungeon, which was us Next to the church is the old convent, which also houses a small museum with centuries-old religious relics, artifacts and other antiquities, dating back to the 16th century. Included in the collection are an ivory statue of the crucified Christ looking towards heaven; a statue of the Blessed Virgin, said to be presented by Queen Catherine of Aragon; relics of St. Ignatius of Loyola, old gold embroidered ecclesiastical vestments, books with carabao skin covers, and librettos of church music written in Latin on sheep skins. Here you can also find the cuadro paintings made by the Filipino painter Liberato Gatchalian in 1859.ed to punish natives who violated the rules of the Roman Catholic church.

Baclayon is some 6 km east of Tagbilaran City. Catch a bus or jeepney in Tagbilaran, going into the direction of Baclayon. You may also find a tricycle willing to bring you there. Inmaculada Concepción Parish

The mission of Baclayon was established by two Jesuits Juan de Torres and Gabriel Sanchez who arrived in Bohol on 17 November 1596. They came from Cebu. Torres reports that he could not find a decent place to celebrate Mass, there wasn’t even a serviceable table in the dwelling they stayed in. The Jesuit convinced the inhabitants to build a church, which they accomplished in no time. This was most likely a bamboo and thatch church. Baclayon served at one time as the residentia or center of the Bohol missions, where the superior resided. Baclayon was one of two towns that did not join the Diwata revolt (1621), remaining steadfast in the Christian faith.

Despite claims that the present stone church in Baclayon is the oldest in the Philippines, evidence places the construction of the church to 1727. The belief that the church was built in 1595 may have come because of a 19th century report by the Recollects that the mission was founded in 1595; but the same report lists two other dates 1593 and 1594. The date 1595 inscribed on the church façade is a later addition.

The adjoining but separate tower may have been started by the Jesuits, but it was completed during the administration of the Recollects, ca. 1777 as a stone inscription on the tower indicates. The inscription was recently defaced. The church complex was fortified with a wall built by the Jesuits. The walls’ coral stones were used by the Recollects when they built a new wing of the convento in 1872.

Heritage Features: The church has two facades: an inner one which is Classical in inspiration, and outer one built in the 19th century by the Recollects is a portico decorated by three arches. The addition of porticoes to the façade seems to have been a style prevalent in Bohol and Cebu during the 19th century. Porticoes are found in Loay, Loboc, Cortes churches in Bohol, and Talisay, Recolletos, in Cebu.

The green and gilded altars are the focal point of the interior. They are exuberant versions of Baroque popular during the 18th century. Although the main retablo displays saints of Recollect devotion, the retablo itself traces to the Jesuits whose emblem and motto “Ad majorem Dei gloriam” surmounts the main altar. In the nave are found two benches carved in low relief. One features genre scenes: a goat tied to a tree, a coconut, nipa grove, and a man in stocks. A painting of the Ascension, Church Fathers and San Vicente Ferrer are found in the nave. These date to the 19th century.

The church had a pipe organ installed in the 1800s but now in disrepair. The choir and organ loft are decorated with cut out designs. The painting on the stucco finish of the church is of recent vintage (1996) and does not conform to the style and period of the interior.

Behind the church and convento are remnants of a fortification. Oral lore identifies some structures as horse stables, a kitchen, and a jail.