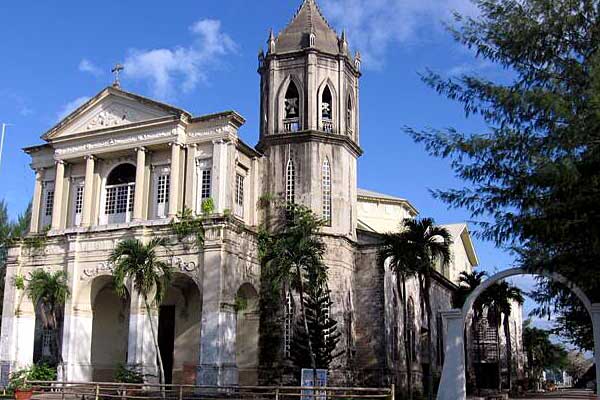 The town of Dauis is located in the Island of Panglao, on the side facing Tagbilaran City. Panglao Island nestles closely to the main province of Bohol and is connected to the mainland by two causeways. Located 3.1 kilometers southwest of Tagbilaran, the Dauis Church is visible across the narrow channel from Tagbilaran and can be reached by hiking through a pleasant path, or by riding a motor bike or car. Passenger jeepneys and mini-buses ply the Tagbilaran-Panglao route through three directions; a tourist may simply ask at the terminal as to which ride passes thru Dauis town.

The church occupies a strip of land on the shore of Panglao Island opposite Tagbilaran City. One of the most beautiful churches of Bohol, one gets an excellent view of the church and convento from the Mansasa seaside as one travels from Tagbilaran to Baclayon. The approach from the Gov. Jacinto Borja Bridge also gives an impressive view of this church.

Even before the Spaniards arrived, Dauis was already well-populated as shown by early Chinese artifacts retrieved in the area in the 1970’s. The first Spanish missionaries arrived in Dauis in 1697. According to Javellana, after 1753, the Jesuits moved their main residence from Loboc, in the interior of Bohol, to Dauis by the seashore.

On 1768, the Jesuits were expelled from the Philippines and all Jesuit missions were turned over to Augustinian Recollects. The Recollects administered the Dauis church until1898 when the Filipinos revolted against the Spaniards.

Based upon Jesuit records, a church of light materials may have been built in Dauis earlier. By 1753, another church with a convento was finished under Rev. Fr. Joseph Nepomuceno, a Jesuit. The Recollects built another church of bamboo and wood in 1769, but this was burned in 1795, thus necessitating the construction of a fourth church. An 1886 report described this church as made of tabigue and roofed with nipa. This must be the one immortalized by a painting on the ceiling on the sala of the convento.

The present church, the 5th, was started by Rev. Fr. Julio Saldana, a Recollect, in 1863. This was a meter more in length than the older one, but 9 meters more in width, and 6 meters more in height. The first level façade was completed in 1879. Fr. Saldana had his name and date finished written on the frieze above the principal arcade. But by January 1884, the 4 arches supported by a column holding up the cupola collapsed. Repairs were made; a second tower was built but left unfinished as it stands today. The upper level of the façade was completed in the early 1920’s by. Rev. Fr. Natalio del Mar. The church was consecrated by Bishop Juan Gorordo of Cebu on August 23, 1923. In 1924, a cross was installed over the pediment; 61 years after Fr. Saldana laid its cornerstone.

The present church is a mixture of artistic styles. The Gothic influence, as mentioned in an 1886 report, is manifested in the tower and its half-built twin: the bases of the towers feature narrow lancet windows, and the uppermost level of the sole belfry, constructed in 1938-1939, bristles with pointed arches, spires, and crockets. The commemorative inscription “ Fr. Saldana”, placed on the frieze of the main entrance, can still be made out despite so many renovations.

The church in Dauis is one of the sophisticated and complex structures of its kind in Bohol. Built according to a plan for basilicas, that is, with a high central nave flanked by lower aisles, certain innovations have been added such as a pair of extensions to form “transepts “. The transept “arms” are unique, as their walls are built diagonal to the nave, instead of the common right-angle configuration. The crossing is topped by a cupola in the shape of a low octagonal pyramid.

The church’s front has a portico which shades the width of the entrance. Above the portico is the second level façade, built in an ornamental neoclassic style. This extension encloses the choir loft, a common feature in Bohol churches.

Even the apse has a grand entrance of its own. Open spaces on three sides of the church allow an excellent view of the architectural design and heighten its monumentality.

Upon entrance to the church, one finds four massive posts, 2 meters long by 1.5 meters wide, supporting the portico that shoulders the choir loft. The retablos or altars in this church are a mixture of styles, most probably recycled parts from structures of different historical periods. The center altar, where stands the image of Our Lady of the Assumption, is in the form of a temple, not a wall-like retablo. The side altars, in the transepts, have 18th century twisted columns. The niches are neoclassic. The image of Our Lady of Consolation occupies the largest niche in the gospel retablo. Above it is that of the Child Jesus, and below it that of St. Jude.

The wooden pulpit of Spanish times, carved with designs, still stands. Two antique confessionals are still in use. This church has one of the most beautiful Stations of the Cross. It has uniformed benches and well-kept tiled floors.

The paintings on the ceiling, over the nave and aisles, bear no biblical scenes. Instead, the illusion of a Renaissance artesonado, or coffered ceiling, was preferred. Beneath the choir loft are murals of (a) St. Anne and the Child, Mary, (b) St. Joseph and Jesus, & (c) Jesus Triumphant Entry into Jerusalem. On the ceiling above the altar are painted biblical scenes.

The stained glass windows bear no designs. However, the areas between and above the windows are ornamented with painted angels and religious symbols. The signature of Ray Francia, who painted many Bohol churches from the 1920’s to the 1930’s, appears above the north transept. Canuto Avila and sons, dated 1949, signed the paintings on the south side of the sanctuary. The signature of Lito Arcaya is found on the panel over the sanctuary.

The high bell tower at the church front, looks dignified, rising tall and straight with its narrow vertical openings. One climbs a winding staircase to reach the top. As one reaches the level of the choir loft, he can clearly differentiate the Spanish and American influences in its construction; for instance, the use of coral stones and poured cement. In this tower are the 2nd and 3rd oldest bells in Bohol, both dated 1783; the oldest, dated 1690, being in the church of Calape, Bohol.

The plaza fronting the apse is bordered by a low wall, possible remains of the fortification erected by the Spaniards. Near the back of the church stands a squat hexagonal tower built as a look-out for Moslem raiders. This was commissioned by Recollect Rev. Fr. Santiago de Corazon and bears the year 1774. Locals call this tower “Castillo del Corazon de Jesus”, possibly after its builder, but it could also mean the Sacred Heart of Jesus pierced by an arrow – the symbol of the Augustinians – that is carved with the year 1774. When on top of this tower, one gets a good view of the church and the convento. On the opposite side one gets a glimpse of the beautiful skyline of Tagbilaran City, which lies nearby across a narrow channel.

The part of the convent parallel to the church is built of massive coral stone blocks dating from Jesuit times. The newer L-shaped wings are of fine corral stones. Signs of antiquity are the elaborately carved corbels supporting the roof beams. A cantilevered gallery runs almost around the convent. In some places, the tabigue walls are plainly visible, framed by massive, sinuous tree trunks. The side facing the sea ends in a large breeze-cooled sala dominated by a huge octagonal ceiling with paintings by Ray Francia depicting the founding of the Dauis church.

A well, known for its water’s healing power, lies at the foot of the main altar. Local history tells that this well originated from the Spanish era. Pirates often attacked Christian settlements and it was during one such attack that the people took refuge behind locked doors of the church. Besieged by the enemy for days, the people run out of food and water. The well miraculously sprang up and since then has become the source of drinking water for the populace nearby, especially during droughts. The water tastes truly fresh, despite the well’s closeness to the seashore.

The image of the patron saint, Our Lady of the Assumption, is famed to be miraculous, too. (So many petitions of her devotees are granted!) Tales from time to time crop up that the patron saint’s attire is filled with amorsico, a vexing weed. The faithful believe that their Mother goes around Her domain as she watches over Her children. Dauis church is a pilgrimage site, with the pilgrims carrying empty containers to take home water from the miraculous well.

A short walk from the convent’s end leads to the shore where there are sheds that jut out to the seafront, providing an ideal place for prayer and meditation, or for pure relaxation, feasting one’s eyes on the beauty and glory of God’s creation: the often placid sea, the beautiful scenery, the distant harbor lights of Tagbilaran City, to mention a few.

A lovely Shrine of the Blessed Virgin Mary stands close to the shore, near the squat watchtower. Its winding staircase is an invitation to get closer to Our Lady, and to enjoy the lovely vista of land and sea laid before one’s eyes.