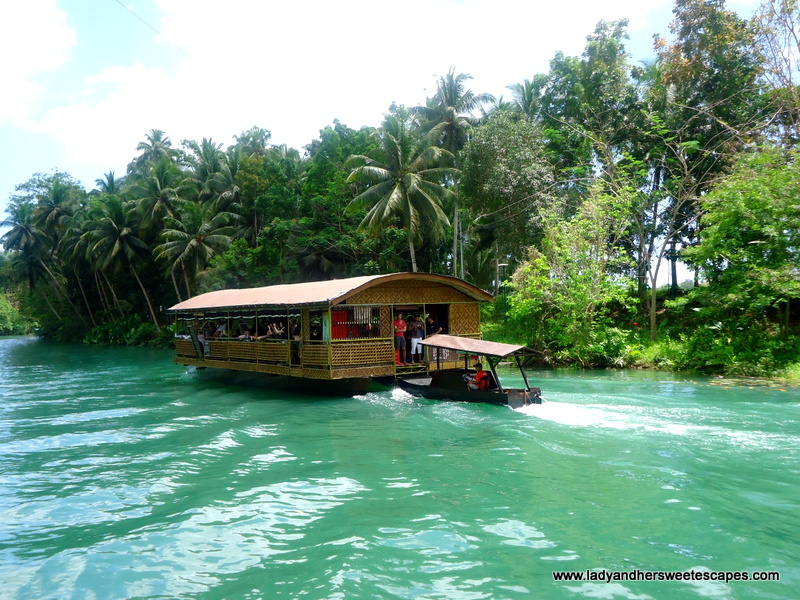 Loboc is a very popular tourist destination in Bohol Island. Primarily because of its emerald calm river, and secondly because of an old Christian church, which has not lost its greatness even after a destruction. Locals are trying to develop tourism in the area by opening new hotels, restaurants and attractions. Loboc River Cruise and Loboc Eco-Tourism Adventure Park are the most popular so far.

One of the popular destinations in Bohol is The Loboc River where one can get on board a floating restaurant and enjoy the Loboc River cruise with buffet meal. The cruise and buffet costs P450.00 per person and this includes a short cultural show by the local community. Buses and jeepneys are available at the Tagbilaran City Dao Integrated Bus Terminal. It takes approximately one hour travel by public transportation from the city, and around 40 minutes travel by private transportation. Loboc town is located approximately 24 kilometers from Tagbilaran City.

The Loboc River (also called Loay River) is a river in the Bohol province of the Philippines. It is one of the major tourist destinations of Bohol.
The source of the Loboc River is located in the town of Carmen, almost in the center of Bohol.

From Carmen, the river takes a westerly course for a distance of about 1.5 kilometres (1 mi) then flows due south into the Mindanao or Bohol Sea. Its drainage area of approximately, 520 square kilometres (200 sq mi), is bordered by a horseshoe-shaped chain of mountain peaks rising to an elevation of 800 metres (2,600 ft). Rainfall is distributed almost uniformly throughout the year, thus Loboc River has a steady and high base flow.

A river cruise on a floating restaurant is the main activity that the Loboc River offers, attracting both local and foreign tourists. The river cruises start in the Town of Loboc and travel upstream to the Busay Falls. Because of itsclean, green and peaceful river environment along with the local food served, the place is now widely known across the country.

Other attractions are hanging bridges over the river and paddle boarding.